Or one might say, of genealogists, that they have their "lead feet" still. There's a lot to say. Being and life does not come from documents. Oh, they're doing DNA, now? Well, that's not a completely closed issue, either. Lots and lots of automated (thereby, computer controlled) work is done with this type of analysis.

Wait, mathematical analysis has solved all of the problems that we might face. Well, not.

You know, the SAG published, in part, via the internet. Lots of people do. Your bank wants you to go paperless. So many examples.

What's the theme? Well, the focus now is going back through ten years of stuff and pulling out those things that will continue to need attention going forward. And, there is a specific intent behind this post, albeit we'll not mention the particulars. Rather, there was a recall that we had seen something about a decision.

And, it's around the 2010 time frame. We were newbies yet knew the significance of this choice. And, look at the last year. Yes. On-line it is, except people are meeting, sometimes in groups that are larger than is suggested as a limit.

The milieu then? Well, we would have had a decade and one-half of the internet having gone through several stages from the early days of Mosaic. And, we would have seen lots and lots of problematic results coming from unexpected behavior which would have been known had people paid attention to American History.

In particular? The Wild West. Yes, we're getting to that now with real families as the focus.

Anyway, we had a blog post: On blogs and other modern means. This is from June of 2011. We were still in the honeymoon era with respect to the Thomas Gardner Society, Inc. work. And, we left a comment at the Slavak Yankee site where we first read the news about no internet. 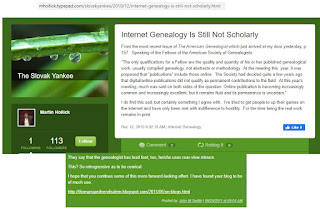 With respect to current events, one motivation for the post is something that recurs. As newbies, we usually took it as some oversight on our part when we bumped up against some genealogical wall. After all, there are those brick walls that people write about. On the other hand, some of the walls that we have seen were not brick at all, in fact, one is an ongoing affair with resolution pending several factors clicking. Not genealogical; rather, we seem to be seeing issues of personalities and their differences (see Ethics, the next post). As said several times, one of  us has no pedigree so cares less for those games that relate to that type of one-up-man-ship (who's better?). We'll get back to this.
BTW, want to contribute, we are updating the Thomas Gardner Profile on WikiTree with regard to Thomas and Margaret and the kids and more. We have a couple of G2G posts that are on-going.
Oh yes, what's scholarly (back to Slavak Yankee's post)?  Our offering is Gardner Research and The Gardner Annals. Contributors, of all fashion, are welcomed.

05/02/2021 -- We need to move to a focus on the frontier century where lots of families obtained their hole in the paper trail. But, these can be bridged. As well, we can look at modern examples as a type of juxtaposition: Two different times.
Posted by AJSwtlk at 6:14 PM