TL;DR -- The ACM which is an old computing organization takes on ethics and its absence from the everyday decisions.

We have had a few posts on technology. A recent one looked at an ongoing bit of discussion: content versus configuration (which is a type of recurrent thing that is so common). Then, we just relooked at a dilemma related to technology of a particular sort, namely that wild-west thing of the internet. Also, we noted that genealogists 'foot drag' which is fine. Nothing that we're doing here will harm anything other than egos.

Wait, was that just or was it harm causing? Or, was it necessary? Those types of things get ignored in the day to day, especially in the business world behind the doors. Oh yes, ethics is a subject that we can go on about without end but won't.

It is important, though. The latest CACM has an article on AI and Ethics. The ACM is an old group involved with computing from the beginning. They even had the opportunity to have an annual prize titled Turing Award. The 2020 winners - Hanrahan and Catmull - worked on 3D graphics (including getting Pixar going).

The article motivating this post is titled: Operationalizing AI Ethics Principles. Frankly, this is nice to see since many discussion about AI are seemingly unethical in the sense of the potential for AI to do harm (of very many varieties). One possible excuse might deal with complexity's hardness which is true. So, computing and ethics still have a lot of open areas needing discussion. One might say that's human nature.

Over the past decade, we have tread through the valleys, so to speak, even that one of silicon. Gosh, would the wild west of the internet have even happened if ethics were on the table? Of late, there seems to be an interest, so we'll pay attention. Not to get too deep now, let's close with pointers to ethics and a few topics. 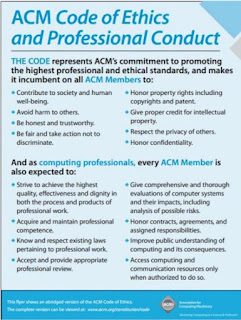 As said, no end to the subject. We are in a new age, technically enhanced or challenged depending upon one's view. Before the internet, we had TV and before that radio and ... Of late, some seem to have lost their manners. Is such an observation unethical? Is snarkiness a matter of not being ethical?
Going back to Thomas and Margaret and their time, we have noted that there is little that we know of the couple except for what they wrought via their children. We are actively documenting that. We noted, too, that Thomas did not even bother to join the church until later (about 1636 - we have that year mentioned in one of these posts) which might look, in hindsight, to have been a move to keep his children out of trouble with the local society. We know, those Puritans (was that snarky?).
One thing that we can know is that the 400 years of history can have some importance to today's world. And, looking about, there is no end to the amount of work that one can do. We will just be as ethical as we can be.
Remarks: Modified: 12/12/2020
12/12/2020 --
Posted by AJSwtlk at 10:29 AM