TL;DR -- We found a new blog, today. 'new' in that it's less old than our own. We expect good things to be read at murrey and blue. Of course, this note being done later, we can fix an oversight: somehow, we forgot to mention William Marshal (without whom we would (might well) be speaking French - having lost the language of King Alfred the Great).

We had a question recently about motives for people coming to New England, early on. We, more or less, have liked the overview given by the author of Albion's Seed which we first read in 2016 while first exploring all of the ways that New Englanders continued to move after their arrival. We can map out the movement through time. For Virginia, one can see a map that shows the extent of its reach plus the counties defined at the time from the beginning. The expansion was west, at one point, with a limit of the Rockies and points west later on. But, we know that there were eventual constraints, with  West Virginia being one of these.

In Albion's Seed, early New England (Thomas Gardner et al) were reconnaissance. The real deal started with Winthrop who represented on pathway of which were were three more. After the Revolution (coming up 250 years ago), the expansion started in earnest. However, there were facilitating changes, such as the establishment of the Cumberland Pass through which we had people going west. There is a lot to look at. In the case of one family, we found a hanging of an abolitionist minister out in Texas before the major conflict that split the country in the mid-1800s. Three years ago, we looked at the experiences of Col. T. W. Higginson a little further north. There have been conflict and turmoils continually throughout the U.S. history and before. 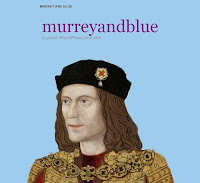 On FB, recently, we saw a post from the Richard III society. We have had posts about him as it involved the long War of the Roses whose aftermath was of importance. Too, his body was found and re-interned which brought Richard III's life back to attention which got several posts here. Too, other blogs came into existence. One of these is "Murrey and blue." 'Murrey' describes a color that comes from the mulberry fruit.

The post asked: What really happened in 1385, when the Earl of Stafford’s son and heir was killed on a Yorkshire road ...? It was the first time that we read this blog which covers the subject well with illustrations. A name caught our eye: John Holand. The family was familiar for several reasons.

As an aside, it was nice to see history covered, as the whole of the themes related to this was muddied by the Game of Thrones playing loose. We can say that the media, such as blogs, that are coming to fore will allow a more full look at history in ways not possible before technology got off the ground. And this 'murreyandblue' blog gets into detail that is quite refreshing.

Back to the theme, John's father was Henry Holand of a Lancastrian family. Henry married Anne of York. His territory included Dorset which got us to look at the Domesday Book of this region. One of our goals is to keep a long view of history as we proceed with learning more about Thomas, Margaret and others of the Cape Ann venture. So, we expect that we will be looking further at this blog and its cohorts as we pursue our studies further.

There is another view of motivation: The Great Puritan Migration. I like this blog, however, I don't know that we can assume that Thomas and Margaret came here for religious reasons. We had a post dealing with Origins - motivations. One thing looked at were the beheadings associated with the War of the Roses.

Another good one is that from the New England Historical Society. There are a lot more blogs to look at.

Postnote: Back in Holand's ancestry one will find several characters from the time of King John and the MC. We have had posts on those topics. One name to bring forward beyond the interest that has been shown in literature and the arts? William Marshal.