A Ride to Kansas

TL;DR -- Edward Fitch left his home and set out west to join the Massachusetts effort at establishing Kansas as a free state. We look, briefly, at Edward's New England pedigree and his experiences in defending the abolitionist's view during the times of 'Bleeding Kansas' and into the Civil War. Edward was killed in the Lawrence raid of 1863 leaving a wife and three children. This type of thematic post will be more common as research results appear over the next few decades. After the revolution, things expanded upon several fronts, simultaneously. To further more full looks, we include an image related to the Higginson tale of his venture out west.

---
Today's topic focuses on one individual who was out west just prior to the Civil War and who has a solid New England pedigree. We recently read an article published by the New England Historical Society (Apr 2022) that is an example of what we will see more of: Edward Fitch, a Massachusetts Martyr in Bleeding Kansas. We point to the article as it covers the experience of the early settlers of Lawrence KS about which we have had several posts. Notice sections on Bleeding Kansas, The Kansas-Nebraska Act, Staking a Claim, and others.
The main character is Edward Payson Fitch (WikiTree) who went to Lawrence with the third party of the New England Emigrant Aid Company. The Kansas Historical Society sponsored research for a report by Louise Barry: The Emigrant Aid Company Parties of 1854.

The NEHS article on Edward Fitch references the work of the Kansas Historical Society and details events as reported by Edward and others. This type of regional conflict needs more attention; for instance, of those who arrived in KS, some returned while others went out west. Edward stayed and farmed. Also, he contributed to the advancement of Lawrence as a city. As mentioned, Lawrence was burned in the turmoil of the Civil War. Edward was killed and left a widow and kids. The article has photos of his wife and children.
In an earlier post, we mentioned that Col. T. W. Higginson had gone out to Kansas with a group in 1856. He wrote of parts of his experience with posts to the New York Tribute; his reports were collected into A Ride through Kansas.
---
As we look at the 400ths over several decades to come, we will see topics brought to fore that were not covered before due to several reasons. One of these dealt with technology and its absence which is no longer a factor. In fact, we have too much technology being misused too often. Be that as it may, too little or too much is an interesting problem to have. Let enjoy the new situation where topics that motivate posts like this one will be a common theme.
The 5th generation bore the onus of the split. The 250th of that is coming up (SAR/DAR). We have had several posts on that theme. Stepping forward with the generations, we have to deal with a much  larger framework, an example of which is the Frontier Century. Our first look at that considered the early explorers many of whom were Canadian (before the split, it was the same colony) with the far west being introduced, mainly through the fur trade. Then, we had several posts dealing with the carving of the U.S. Interior that happened over more than a century. 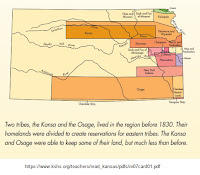 ---
During the earlier times, Pres Andrew Jackson decided to move American Indians from the east coast to the wide spaces of the west. Oklahoma gets more attention in this matter than does its northern neighbor. But, Kansas has as much involvement in the historic aspects as one can see by things like having a Cherokee County. Too, there has been a lot of research related to the impacts of the choice by Jackson. We recently looked at an early Mission for the Osage that is still extant having started in the early 1830s.
Remarks: Modified: 08/27/2022
08/27/2022 --  Finished a dangling sentence in the TL;DR section. Must have been called away in a multi-tasking mode that never seems to abate.
Posted by AJSwtlk at 12:24 PM