TL;DR -- As we fill in descendant trees for all of the families that interlocked in the early times via marriage, we want to remember those who had no progeny. Joseph and Ann (Downing) Gardner are an example. He was killed in the early troubles with the American Indians. She married an old governor after that while getting Bradstreet to sign a pre-nup. Joseph's sister, Seeth, had children and grandchildren. One Conant line ended early. There are many more to add to the list as we find them and remember to do the recording.

Of late, we have been looking at the wide expanse of people related to Thomas and Margaret. For a time, we were looking at the interior which was carved up under the guise of Manifest Destiny. Before that, and now in a more balanced mode, we had the nautical focus. After all, Salem was a port.

Many heritage society communities focus on descendants. How else can they keep their membership? But, we have kept an interest in those who had no progeny. While reviewing the portal today which pops up some random text, we got this page. The text showed two of the children: Joseph and Seeth. 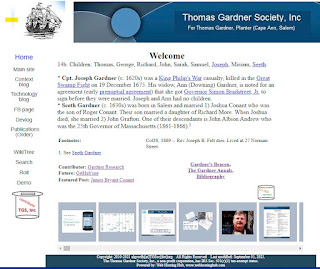 Joseph Gardner and Ann Downing did not have children. Seeth? She did with her later husband. Her son, Joshua Conant, who married a daughter of Richard More, did not have grandchildren. That got us to a recent post of someone with no progeny: JB Conant.

We get sensitive to this while looking at pedigrees related to application to heritage societies. Of the children in a family, many times only a few are in the database due to no application being submitted for the others. To us, that would be something that the heritage society ought to look at. Why? Many claim biblical leanings. If so, transitive 'honoring of the parents' might suggest that. In any case, we intend to keep with the focus on those who are lost in history.

BTW, in our look at the frontier, we see many who are lost just due to genealogists being obtuse in so many ways. We are ready to discuss those issues, as required.