TL; DR -- As we go forward, there will be a full measure given across the centuries, from 100 years ago to 400 years ago (using 100th, 200th, 250th, 300th, and 400th). Some of the families were here the whole time. The area covered is huge, and the amount of events of significance is some type of phenomenal entity that has never been grappled with as is necessary. Hence, our announcement alludes to some start of activity; there is no end in sight; if done right, we can help set the stage for subsequent reviews of this type.

Except, we are aware that some would not want us to celebrate due to the consequences of Europeans piling up over here. So, we use the notion in other than a celebratory fashion under the context of the 400th turnover of the yearly calendar since those early times. With respect to the larger scope, New Spain and New France are on their way to the 500th.

It is time to get more regular with this topic, hence we want to lay out one perspective mentioned several times which does add some spectral elements to the matter. A fuller tone will be applied consistently.

There have been several good histories of the U.S. available in book form. We are seeing new attempts using multi-media. This snapshot of the era of the 250th comes from a Wikipedia overview that is quite good and shows the population of the Colonies as will as the extension post the Treaty of Paris (1783). 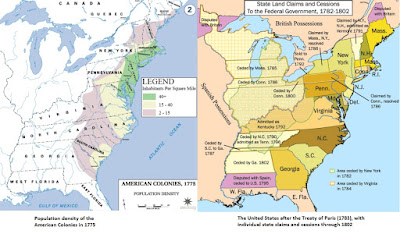 Our first post on the 400ths was early on 06 Jan 2013: 400th anniversaries. After that, there were a few more which we'll tie together. But, as we can see via the theme, we are looking across a wide spans of time. We expect that this will entail lots of interesting study and discussion.