This starts with a Memorial Day twist but merely touches on the topic of some necessary work.

Just like we look to the NEHGS as a focal for all things of that northeast part of the country, we look at another group for a focus. So the span is from the start of the early seventeenth to around 1776. These two are important factors in the study of history of the U.S. from several perspectives related to our 100-year theme. Then, we need to get more of a focus on the post Revolution expansion.

The NEHGS is out of Boston and came into existence in the 1830s; DAR is from the latter part of the 1800s. So, they each have a heritage and an accumulation of material of importance. And, they both have genealogists on board and have been major players in how things are done.

Genealogy anew? I saw one paper dealing with genealogy and advanced methods without looking too hard. The Lord knows, there are plenty examples of computational support for these types of studies, say WikiTree and its peers. The following two links came up in a search this morning as I was trying to get some notion related to the public-ness issue. You see, the old and the new are going to need to adjust themselves. Some want to run after new media (say, the social type); others want to be a little more conservative.

Example (mainly  as there is a whole lot to discuss): 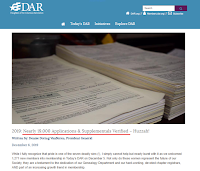 Wide spread of topics? Sure, and we can fill in the pieces as well as extend boundaries. On the former, we have broached on the subject of databases, virtual experiences, truth engineering (our thing) and more. Going into the future will not see any diminishing of complexity. Speaking of which, an old thought ties back to Rev. Bayes. Guess what? He's now the darling of the computational crowd. Lots to discuss. From a genealogy mode, we can speak of him, too: Genealogy and Bayes. That post was motivated by another group, not mentioned, who do several things wrong. Actually, I would argue that they are un-American which is a proper theme for the Memorial Day weekend.

Be that as it may, we are back to work and looking forward to 2023, 2026 and further. BTW, within the context of the Hereditary Society Community, I have proposed that we need a database with a particular theme brought to fore for discussion. Some like the idea; others were more adamant that they did it well already (I beg to differ); this mention is merely a reminder that the topic has not been closed and still requires some type of attention.

05/25/2020 -- The organization handled 23K 'applications and supplementals' last year (2019, through November) of which 19k were verified. Now, that is impressive work. BTW, 'Patriots' include people who performed all types of service supporting the inception of the U.S. Also, technically, this discussion relates to the 'scale up' that we have seen be so prominent the past fifteen years. All sorts of issues come to fore; almost, one might say, this represents a modern 'Babel' where the underlying problems now do map back to those former times where lessons to be learned were not.