Earlier, we discussed, briefly, the sources for a recent issue of Gardner's Beacon, namely Vol VIII, No 1 that published in early June. We will do something similar for The Gardner Annals for which we just published Vol IV, No 1.

We will reconfigure our Research and Annals section, hopefully with a common reference strategy that will include a bibliography.

This recent issue covered several topics including finishing up scanning the articles of The Massachusetts Magazine and presenting the Table of Contents for each issue. In this review, we ran across lots of characters who will be looked at more closely as we did take the time to research both older and newer material.

For instance, we have a lot of information about Judge Thompson. It was a year ago when we first started to read about him. And, several items have come out of his Reminisces, such as his experiences with Henry Plummer who was hanged by the vigilantes in Montana.

The following are some additional links which will be updated as we run into material.
---

We will be adding other material, such as that associated with F. B. Sanborn, and more.

Finally, as we get the print of TGA Vols III and IV ready, we are looking at the next issue. As such, our focus will be of three things that pertain to the past, present and future. That is, the 400 years of history provide a rich source for continuing analysis and subsequent improvement.

Those three topics are culture, history and genealogy. The American experiment is without doubt known across the globe and offers a never-ending platform that is as broad as one might expect, namely human culture. Then, history deals with time and events relating to the culture where we have various actors by generation. 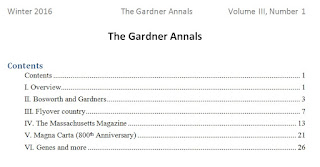 Given the upcoming even of the 4th of July, we might take Rev. John Wise as an example who was the 'inspiration' for the Declaration of Independence according to President Coolidge. He pre-dated Jefferson's efforts by decades. Rev. John's milieu was Ipswich, Massachusetts. He was the son of a butcher and a graduate of Harvard. We will be writing about him, again.

09/22/2018 -- We are about ready to print TGA Vol III and IV with the remaining issues of Gardner's Beacon. We will do this in both black and white and color. Table of Contents for TGA Vol. III is shown in the image. Last fall, we printed TGA Vol I and II.