This week, there was a query from Dr. Stuart Gardner Garrett of Oregon about the "1850 Gardner connection" with the ship, Bostonian. Did we know?

Well, no; however, there is an interest in places as they involve people. And, this story is very interesting. Too, Gardner Research has this as one of its foci.

From one account, a ship coming up from San Francisco found another that had run up on a sand bar in a river in Oregon. One story was told by a descendant of a passenger on the later ship, Kate Heath. The ship that was lost was the Bostonian.

Firstly, there were no lives lost; the crew had saved the cargo which was of a very useful variety. As well, the crew had begun to dismantle the ship which was used to build structures in the town that was to be. The cargo was stored on shore under the ship's canvas. At that place, the town was built using the ship's lumber and part of the supplies.

The town? Gardiner, OR. It was named after the New Englander, named Gardiner, who had funded the ship. The descendant's account said that Coffin was captain. Actually, the captain was George Snelling who was a nephew of Mr. Gardiner. Another thing of note is that Winchester, Payne & Co. was involved. 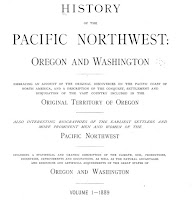 The History of the Pacific Northwest (Volume 1) had a nice coverage of the story. But, they did not have much about Gardiner. There were various suggestions in many later writings.

Finally, research done for the National Register of Historic Places pulled things together (see page 8) in 1994. They identified the owner as Henry Gardiner, also Coffin was captain of the Kate Heath. Later work, added an initial. So, we have Henry D. Gardiner.

But, who was, and whence came, he? To be studied further.

There will be regular "Places" posts, due, in part, to the stories associated with them. Descendants of New England's Gardners can be found everywhere in the U.S. New England towns drove all sorts of settlements (to wit, Ipswich Canada which covers the area near Gardner, MA but fairly remote in the 1600s). Lawrence, KS has a main drag of Massachusetts Avenue due to the influence of the founding folk. Not far away is Gardner, KS. Perhaps, a list of cities/towns named Gardner/Gardiner in every state ought to be done.

Back to Henry, though. Unfortunately, "Bostonian" was popular for names of all types of boats (oops). Too, did no one in Oregon ask particulars about Henry, at the time? This seems so much like the case of hidden information about Thomas.

03/02/2019 -- Update of information (lots - Gardiner that was, Historic Puzzles). Added the image as we're building an index via images at our portal to truth.