Where was Thomas? II

Earlier, we were looking at where Thomas and Margaret were for eleven years, starting about 1626. As well, we have asked, Where is Thomas? 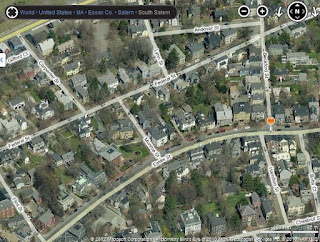 There are many years to cover, but let's take one bit of data from Dr. Frank A.'s book. Dr. Frank (pg 10) says that Thomas, in 1641, would have lived on the north side of Essex Street between Beckford and Flint (see Bing map -- bird's eye view). To quote: This square was called in the Town Records in the second month of that year, "the field where Mr. Gardner is."

It is not far from where Joseph and Ann lived a little later which is now the location of the Essex Institute (Peabody Museum). Too, it's a stone throw from where he was originally buried.

We'll have to map out where Thomas owned land. Dr. Frank says that there was only one recorded sale during Thomas' life. Otherwise, he accumulated property. A lot of his land was bought by his son, Samuel, and was in the family for several generations.

One topic that we'll consider, which relates to both prosperity and property, will be the War of 1812 which seems to be overlooked, for some reason. Those who were in shipping bore a lot of the costs.


08/12/2018 -- Thomas, with others on Gardner Hill, was left where he was. Stones were moved over to Harmony Grove Cemetery. A few of those withstood the move, say that for Seeth. Most did not and are piled somewhere. At the burial site, though, the road was cut through. So, the remains? Well, moved to God only knows. Or, if the burial was away from the road, it is beneath some structure. Lots to think about. Reflect on. How to proceed into this mire?