This blog of the Thomas Gardner Society, Inc. will deal with genealogical, and historical, material with a prime focus on Thomas and Margaret (Fryer) Gardner of Salem, MA. Too, it can serve many other purposes, such as to facilitate collection of material, to help organize information from disparate sources, and to promote discussion about these matters.

Here are some opening questions that are good examples.

There will be a running list of questions that will be maintained and researched. Blog posts will deal with the related work (see Section of process, below).

Now, we know a lot about Thomas from the work of Frank A. Gardner, MD (see TGS.org) and his progeny (see the descendants list on the Wiki page). However, this work covered the period until the early 20th century. Evidently, there needs to be work done to bring that information up to date. One of our goal is to get that accomplished.

We need to learn more about Margaret. Some even have Thomas as married to unknown. We are presuming, as did Dr Frank, that Margaret was the mother of the Gardner kids.

The Secretary/Treasurer of the Society is a direct Thomas descendant through Samuel as was Dr Frank. I only have an in-law association with the Gardner family. As well, I am not a genealogist but have done a lot of research in my years. My experience is applied mathematics and computing. The past year of researching my wife's tree has piqued my interest. That the NEHGS weds 'historic' and 'genealogical' really describes the proper viewpoint, in my mind. So, the blog will be wide-ranging but will keep coherency.

There are many topics that will deal with other family trees. One estimate that I saw was from a researcher who had collected 180,000+ ancestors in his work. In the case of my wife's tree, there are 200+ early entrants (pre-1670) just into the New England area with all of these families coming forward in time. That is a whole lot of people to consider. Bringing in folks from before the migration period really explodes that number.

Of interest to me is the whole notion of royal descent (RD). In the past, this status (for want of a better word, for now) was claimed by only a few and was used as a means to stand out. However, some estimates of those who have RD is very large indeed. But, it really does have historical significance. For one, knowing of this may really increase appreciation for those who ventured over here from a known situation to one that was unknown. Yet, things were pretty bad over there for many. Hence, the flux occurred across the waters.

There are many topics here to discuss in regard to RD (Ole's blog, example).

Thomas Gardner represents several things, such as the backbone of the country and economy, for various reasons. This will be a continuing topic since his life can be used to discuss current topics, themes, problems and what have you. There was not much written about Thomas and Margaret, but their offspring all lived to be contributing adults. And, some of the Gardners helped found tremendous families, such as is the case with Sarah and the Balch folks.

Too, Thomas had to be a guy who was comfortable with himself and who was very effective as he showed with his successful traversal of troubled, and hard, times such that he and his kids thrived. That is a real brief look which will be expanded upon. To look at Thomas' kids, one could not but think that the guy was a terrific human though he did not flash across the sky.

Now, having said that, not being in the radar does have its benefits. There are no records like this one (Boston martyrs) which we see related to John Endecott.

Too, for a long while, Thomas was dropped from the list of 'old planters' despite being in the early group. That is, we'll show several lists in which Gardner is not mentioned. One family of those who seemed to have pushed him out has a cemetery not far from where Thomas was buried. That cemetery is still there, prominently besides the road. Thomas is under pavement, somewhere. To me, an outsider, that little bit of reality represents a whole lot of stuff that we'll go into more deeply.

So, we'll use the cyber realm to document, permanently, where Thomas lies, or as close to it as we can identify.

If it was not obvious, let me state the following: the 400th anniversary of the Cape Ann landing ought to be the time for descendants of Thomas Gardner (Salem) to make sure that his name is known throughout the rest of history.

Our hope is that this little start gives a push in that direction. Some say that Conant was forgotten. The forgotten ones were actually Thomas and Margaret Gardner (and John Tilly who died in 1636 - Pequot War).

About process: blog posts will be labelled into groups. Too, posts will be updated with modification dates. In many cases, additional material will be included at the foot of a post as a dated remark. An example is the Fedaerated blog.

Posts are done real-time, generally without using any fancy editor. That is old-fashioned, but, hey, Joyce, Tolstoy, and many more worked similarly. What is this that people have learned to depend upon a mindless artifact in order to express thoughts in a natural language?

Hence, I usually put an ellipsis (...) at the end of a post to denote an 'in work' status which will be taken away once the first cut of the post is done. Subsequent updates will be marked with date.

The Remarks have several purposes. For one, it is a place for additional information and commentary. Too, there may be forward links to future posts that are related.

Comments are open, for now, without any moderation. The hope is that we can collect information that way. Pointers to material at other sights will always be of interest.

We are using two URLs: ThomasGardnerSociety.org, and TGSoc.org. The below image is from the later which will have a particular focus as portal. The former will be our workhorse, handling specifics related to research and findings. 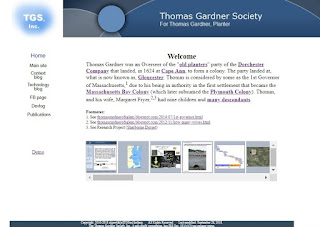 Our major theme is culture, history, and technology. The first, of course, implies human society. History is a puzzle since, generally, it deals with an abstracted view of events, whereas we live with the details as individuals. Finally, technology is a thread that has been around for a long while; albeit, now we see acceleration of this phenomenon becoming problematic. In genealogy, we have all sorts of issues, including software, systems, and biology (DNA, for one example). The scope has a major thread of the 400 years from Cape Ann to now, however it have a broad theme covering the American dream is all that it might entail.

We are coordinating our work through Gardner Research which will publish, regularly.

09/26/2010 -- Added in Margaret. If you look at royal descents (such as the Maverick/Gye royal gateway, WA -- see above), it was the wife (Mary Gye) who brought in the royal history. So, expect that all trees developed and shown here will be balanced as much as is possible with both parents. Having said that, it's obvious that information is missing for many ancestors. But, things can show up from time to time as people keep digging.


09/27/2010 -- On the process for posts, the basic gist of a post remains the same, generally. Through a window of time, though, there may be changes to grammar and some phrasing to remove awkwardness as well as to improve the overall flow. The post will be marked with the date of modification.

09/28/2010 -- Expect that there will be a post on the old burial ground which needs to be re-recognized. From what I've read, Thomas, Seeth, and Samuel's Abel, and his wife Sarah, are there. The stones were, supposedly, moved to Harmony Grove, near the Peabody Gate, when the ground was cut through, and leveled, for the road (Grove). Has anyone seen these lately? As well, we can collect burial places, to wit the Charter Street cemetery has several Gardners. This article mentions the old burial ground (we need to locate it, setup a Google map, etc.).

09/28/2010 -- About old planters. As used above, it refers to the Cape Ann & Salem group. It can also be applied to close-by Boston (note, William Jeffrey, ostensibly of the Cape Ann group, seems to be mentioned here as being in Shawmut and Weymouth) as that is where Winthrop went on rebound from his dislike of Salem. No doubt, this subject needs some looking at. Note that John Lyford (WA, following Gary Boyd Roberts, this means wife's ancestor), who went with Conant to Cape Ann, is mentioned.