TL;DR -- We can split the group of Heads into three eras by a major event. The Revolutionary War (Declaration of Independence) ends the Colonial period. Then, we go until 1900 covering a century of frontier living with respect to the interior. From there, we stop at 2000. We have looked at some of these periods, already having spent some time roaming the interior, with the last two being restricted to virtual looks.

We had an earlier post on this subject (U.S. and Harvard, I) that was motivated by History of Harvard (ours) in the 1900s. Another interest behind the stop and look had been our experience in looking for the pedigrees of these folks, many of whom are of New England families. A few were new arrivers.

This time, we are looking at generations using fuzzy founds, which result in three categories: Colonial, Revolutionary War to 1900, and, then, post 1900. Let's look at each of these and identify the Heads as they relate to the period.

Here we start with the era of Eaton (0th) and Dunster (who was on 1st) and end with Samuel Langdon who was the 11th). The count? Eleven if Eaton is excluded. But, Samuel Willard brings it to twelve. 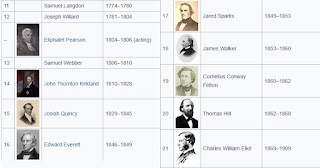 With this, we have the eras of Langdon (11th) and Willard (12th - his ggp was a Head, as well) in the beginning; the twentieth century found C. E. Eliot still as the Head. Count? Eleven (see image).
Here, we have a start with C. E. Eliot continuing his reign and an end Neil Rudenstine (26th). Count? Six.
Even with the first period, we can cover a lot of area due to the presence of other colonial efforts: Spain, France, and others. The last period seemingly has no bounds as development in the U.S. continues at a pace that is astounding, especially since the influx of people never really slowed down much. In that middle period, we have dared to tread for several reasons. In terms of the theme here, we will finish up the Heads and then make sure that we have appropriate information for each about heritage and family history. Then, we will venture into the various research schemes that are pending.