We will start a series of these. Today's theme? Handel? He was the inspiration for several huge talents, such as Mozart, Beethoven, and others. He is known for one piece (next) that gets attention, yearly, but wrote a huge amount of wonderful pieces. As well, when was this dude around? Well, remember George I. He came from Germany to fill in for the absence of a true English (Scotish) line, thereby starting the dynasty that is still there. Handel decided that he liked the place. 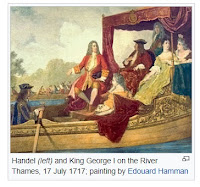 While he was there, things were going on here. We'll pass over that, for now, but recall that a little later another George allowed us (U.S.) to cast off a yoke, at the same time we took on several more that we have not yet learned to manage.

So, the well-known piece? His Messiah. While browsing today, I ran across a video that was impressive (comparative note, below) which is only a few months old (14 Dec 2019). But, it was getting hits as people were listening to it over the Easter weekend (oh yes, more to discuss there, as the heritage is old). And, it was from Sydney.

Now, the comparative note relates back to New England. Many of the characters from the western development are from families that came over early, with some being way before George I came along. In any case, the western expansion is a major theme for us.

But, my first exposure to this was in the Dorothy Chandler Hall (early 60s, was much younger). The performance was by the Mormon Tabernacle Choir and the Los Angeles Philharmonic. So, lots of trained voices and superb musicians, including six bass players.

This work was first performed in Dublin in 1742. It's in English. Later, it was performed yearly as a benefit. In our annals scroll, we have some items that pertain to events across the waters, such as a few related to Shakespeare. We need to create a few more that associate what was happening in each place, through time, in terms of culture as well as in those other realms of so much interest (like knocking heads).