Research continues. There is a lot to do as the scope keeps expanding. Part of this is due to just becoming aware of what was there and to the queries about things Gardner.

As well, I am looking further into Nathaniel Eaton. His experience can stand as the dart board for a whole lot of discussion; and, this bit of debate would be apropos to our times. Pending is a further look at Sir Christopher Gardner. The tales that are commonly told are both off the target and incomplete. So, we will weigh in there. Seems that there might be a relationship with Thomas. We'll see.

Mentioning Eaton. He came up since Harvard has lots of appeal and gets a lot of attention. As it ought. Why? It comes out of the New England experience. And, despite some arguments otherwise, those times of 400 years ago have meaning for us now.

And, getting to Harvard, we will be looking at one early graduate (pre-1700). He was said to be an inspiration for the Declaration of Independence. Now, the Philly crowd (my characterization) gets a lot of attention. Genius, we hear. And, the Constitution. Stands as God-given, does it not? However, those later guys relied upon work done prior to their time. I have a little better grasp of that now having looked at parallels twixt the Massachusetts (and its surrounds) and Virginia (and its surrounds) experiences. Some were in both places, such as our friend, Nathaniel. 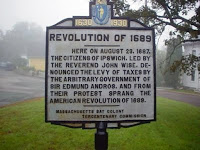 About the inspirational guy, as said by Sibley, Calvin Coolidge, and others. Sibley said that they republished this guy's books in 1772 as debate fired up. We are talking Rev. John Wise from that interesting place called Ipswich. We will get more into that.

John's wife was the daughter of Thomas Gardner of Roxbury. So, as this chart shows, there was a merger of the two Gardner families just before the U. S. Civil War.

Chris Chester (Descendants of Alice Freeman) has an interesting site. He decided to document descendants of Alice. We were happy that we could add information about daughter, Mary, who was the oldest. BTW, the Hodgkins is kin of the Colonel featured by David McCullough in his look at 1776.

Now, John is also noted for being jailed during the tax turmoil in the 1680s. That is, he led the first tea party, so to speak. Dudley had these guys fined. The Governor had them jailed. Later, John sued Dudley and won; the claim: not allowing rights of habeas corpus.

So, "all things Gardner" covers a lot of territory.