This issue of Gardner's Beacon briefly looks at research that will be reported in the next issue of The Gardner Annals (to be published, Dec 2016).
Additionally, a guest writes in this issue about the Magna Carta and the celebration that occurred in the summer of 2015. Then, we start a series on DNA and its issues as they relate to general subjects such as what we know and admissibility of such. 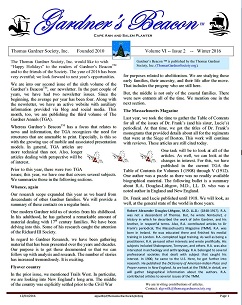 See Vol. VI, No. 2 of Gardner's Beacon for a review of research to date.