In preparation for publishing an new issue of The Gardner Annals, I have been reviewing the 11 years (1908-1918) of The Massachusetts Magazine that was founded by Dr. Frank and friends. There is an author who appeared in Vols III through V. Who was he? R.A. Douglas-Lithgow, M.D., LL. D.

In several of RA's books, the cover page had a photo and brief summary of his associations. This is an example from his book on American-Indian place names (archive.org). 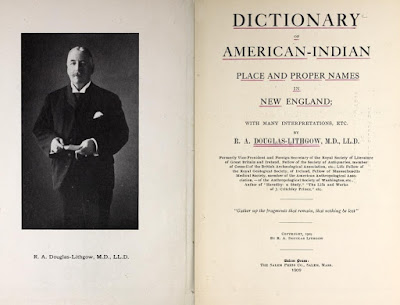 He wrote a book on Nantucket (archive.org). RA wrote a lot. But, again, who was he? I found this at a discussion site related to the Lithgow family (see boards[.]ancestry[.]com).


Despite the extended time lapse since your request for information regarding the ancestry of your grandfather, Robert Philip Augustus Douglas Lithgow, I have a few items regarding the extant British branch of the family which may be of interest.

Very briefly, your great grandfather was Robert Alexander Douglas Lithgow, born in Ireland, a physician in England, who emigrated in later life to Boston USA. He died there whilst your grandfather was still a child (at school in England?). He wrote poetry and several books on American history.

The male line of our earlier Lithgow ancestors is documented (without dates) in the Northern Ireland Record Office and is frequently referred to in these Ancestry community postings by other descendants now living in America and Australia. Thomas Lithgow came from Lanarkshire in 1610 and settled in County Derry.

I can fill in more details regarding this British branch of the family but have not yet thoroughly researched the early Lithgows who emigrated to America and Australia and about whom you requested information.

After much searching, I found one biography that deals with his work in England (Men and women of the time). RA was born in 1846 in Belfast. He settled in London for medical work. And, he came to American later in life. But, none of this looked at his literary work. The American Historical Association (1912) noted three articles on New England houses.

So, on further search, the New England Journal of Medicine mentioned an obituary. On looking further, I found it in The Boston Medical and surgical journal (pg 442). 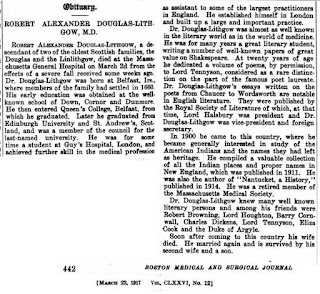 We will get a full list of RA's publications plus gather more information about his work.

Too, we will be looking at all of the authors in Dr. Frank's publication.

12/05/2016 -- R.A. to several issues of the TMM. We introduce him in the Gardner's Beacon and will add a little more about his work in The Gardner Annals.

04/23/2017 -- The Gardner Annals, Vol. III, No. 1 provided the Table of Contents for the first five volumes of The Massachusetts Magazine.

10/30/2018 -- The Gardner Annals, Vol. IV, No. 1 provided the Table of Contents for the last five volumes of The Massachusetts Magazine. These have been printed in one bound volume.