We have seen genealogy sites abound since people could get onto a network with their personal computer, early on with dial-up modems (does that age me?). Some of the real old ones are still around with little or no modernization (but, then, technology ought to be backward compatible - thank you, AOL, for instance); many have disappeared.

Then, along came blogs (yes, these, as with FB, are things of recent memory - by the way, rather than bemoan computing, perhaps, old-encrusted genealogists ought to talk the universals - that, by the way, written by a 72 year old). Now, blogs are great, for many reasons, even if they are not peer-reviewed, in the traditional sense (but, even those things looked at by peers can have errors - errata exists for that reason).

The crux? As one searches, and I have been trolling the internet for five years now (in a smart manner to be described) thereby collecting 1000s and 1000s of things to parse and digest, one can get hits from all types of things of differing characteristics in terms of believability (being kind - too, though, pointing to the basic foundational issues of knowledge).

From time to time, little gems pop up, like this thing on Samuel Maverick. What I have read so far is wonderful. And, remember, it is in the context of Thomas Gardner's very large extended family. Note, though, that there is only one day's worth of input (albeit quite large).

Families ought to provide, for the rest of us, some condensation of the myriad of things written about their ancestors. We can discuss (the Thomas Gardner Society intends to address this need further - ah, yes, in the old context of requirements -- for now, note that the bibliography includes links to books, et al, emphasizing on-line, even Anderson's work is available on-line via NEHGS for researchers).

But, I had not earlier seen what Samuel wrote about New England: A Briefe Discription of New England and the Severall Townes Therein Together With the Present Government Thereof. (1660). I found the little bit that he wrote to be very informative. Why? He wrote it from knowing (see above) and having been there. 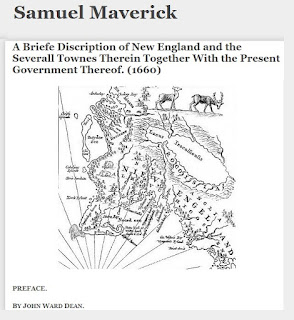 Aside: Of course, the post is being written from the perspective of a non-New Englander who is of the western mindset (big sky and all) by experience. On being introduced to the New England story (that is, beyond Thankgiving's little look at Plymouth), I had to take a crash course in the geography of Essex and its cohort counties. Let's set a little example. There is a trail, used in the mid-1800s, across a western state where the wagon crews took three weeks to traverse (daily grind - no, not mountainous terrain, rather the trials of prairie (say, like the Ingalls saw) travel - modern drivers are way off the mark from saying flat lands - as their perspective is biased from the leveling that results from engineering/paving roads) from one major location to safe stopping point. Nowadays, we can do the same journey between the two cities (one large and one small) in a morning's drive. Essex, actually Massachusetts, would fit within that area multiple times. ... Yes, we will be looking at the western migration of Gardner, and related, families. Samuel's descendants were involved in the west, to boot.