The sea has associations with the New England culture that are similar to those of the English culture. Whereas on the continent, people could move about on the land somewhat easily, and in a wider scope, those on an island have limited ways to move. Of course, technical and cultural factors inhibited movement even on land, depending upon the clime and situation. Yet, the existence of wandering peoples is sufficient to show that people need to, or must, move about; land movement has been going on for a long time.

Sea venturing, on the other hand, took awhile to become a feasible mode for more than the hearty few. We cannot look closely here at seagoing improvements though that would be of interest. And, given modern technology, travel by aircraft seems to have superseded that of land and sea as a natural progression, almost. That is, we find the use of movement by air for the longer haul with lighter loads and, perhaps, for greater comfort. However, there are many types of shipment that require crossing the waters.

So, we have the sea as barrier. But, too, the sea is a provider. There are many tales about this. 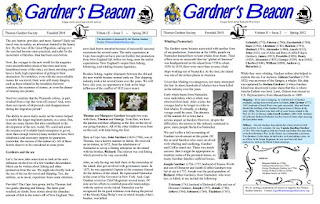 
See Vol. II, No. 2 of Gardner's Beacon for a brief look at one example of seafaring Gardners, namely those on Nantucket.

12/05/2014 -- There was some discussion about "migrates" (2nd para, 1st sen) as to whether it was an error or a inappropriate usage. No, it was not an error. Perhaps, too much license was taken. Not. "migrates" is for the set of those who migrated (very big set). "migrants" has too many connotations of ill repute of late; as well, these folks were not migratory (in many cases, they stayed though we do find that some did do a little moving around in the territory). Our ancestors, in this case, were coming over for their purpose(s) and with great desire to succeed. Too, they left us quite a legacy. So, they just shifted their living quarters albeit with much hardship and effort. ... Ah, 1998 biochemical usage.